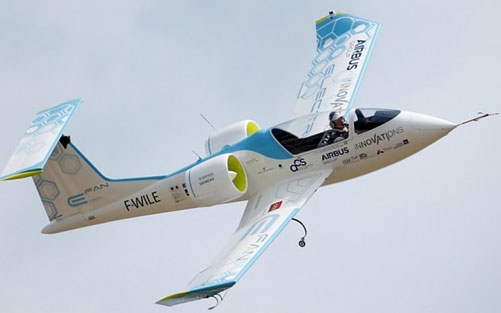 As part of the E-Fan project, the first 100% electric and all composite aircraft, the partners RESCOLL and Institut Pprime ISAE-ENSMA designed and followed the realization of the wing. This composite wing, of so-called classical Colomban architecture, has been validated by the General Directorate of Civil Aviation (DGAC) and has demonstrated that it was possible to create an electric tourism airplane, first step towards future big carriers using this technology.

As an extension of the E-Fan project, SRC Rescoll (Bordeaux – Rochefort) and Institut Pprime (ISAE-ENSMA – Poitiers) decided in 2015 to continue their research on the development of innovative aeronautical structures. This 100% stakeholder partnership in New Aquitaine is the source of the NEOFAC project, partially financed by European regional development funds (ERDF) for 50% of a global budget close to 500 K€. A collaboration joined in 2017 by the company Pika to ensure the industrialization and manufacture of the prototype and the validation part.

“The NEOFAC project consisted in designing, manufacturing and testing a full-scale prototype of a composite box wing made of composite materials for a passenger aircraft (FAR 23 aeronautical regulations). RESCOLL and ISAE ENSMA have carried out predictive simulations that permits to size the structure and realize an optimization going beyond the initial requirements for passenger aircraft and allowing to support the 12g imposed to obtain a DGAC certification in aerobatics. Mechanical tests on semi-structures have been used to make digital models more reliable, to make them predictive and to achieve reliable virtual optimization, “explains Anne-Sophie Andreani, project manager at Rescoll in Rochefort.

The composite box wing is a well-known structure since the 90s, but it was mainly used in fighter jets with very high technology manufacturing processes.

“A removable wing with a caisson architecture is less common and we had to adapt to standard manufacturing methods to transfer this architecture to passenger aircraft,” says Anne-Sophie Andreani. The Bayonne company PIKA took up this challenge within the framework of the NEOFAC program by producing a demonstrator for the Paris Air Show and the test piece in a leadtime of 5 months.

The composite box wing consists of a monobloc part composed by an hollow box with integrated spars on the entire span. This new architecture was made in one-shot autoclave process. The advantage is to reduce the number of manufacturing steps, the number of tools, consumables, and therefore the manufacturing costs.

The box wing has to support all external loads exerted on it. Compared to a wing having classical architecture, the loads are not mainly carried by the spars but are taken by the sandwich skins and the spars. By reducing the number of parts (ribs, spar), the bonding areas are reduced, which optimizes the mechanical performance of the wing. The variable thickness of the sandwich skins also provides better buckling strength without weight gain. Finally, the box wing has an additional rigidity (23%) in flexion without torsion phenomenon at the end of the wing and a loss of mass of 10% compared to the composite wing of conventional architecture.

The sizing and optimization calculations carried out by Rescoll and Pprime resulted in a complex multi-material mapping that Pika had to sample and put in data to initiate the phase of industrialization.

This website uses cookies to improve your experience while you navigate through the website. Out of these, the cookies that are categorized as necessary are stored on your browser as they are essential for the working of basic functionalities of the website. We also use third-party cookies that help us analyze and understand how you use this website. These cookies will be stored in your browser only with your consent. You also have the option to opt-out of these cookies. But opting out of some of these cookies may affect your browsing experience.
Necessary Toujours activé
Necessary cookies are absolutely essential for the website to function properly. This category only includes cookies that ensures basic functionalities and security features of the website. These cookies do not store any personal information.
Non-necessary
Any cookies that may not be particularly necessary for the website to function and is used specifically to collect user personal data via analytics, ads, other embedded contents are termed as non-necessary cookies. It is mandatory to procure user consent prior to running these cookies on your website.
Enregistrer & appliquer